The first and last Hummer only dealership in Rogers, MN. Now apparently becoming a new Tesla service center AND supercharger?!! I’ve been watching this location for months. Pic attached, only allowed one as a new user.

I rolled around the building in my Model 3 as I’ve done every few weeks before. This time when I saw the trench, conduit, and then the concrete bases, I was blown away! I haven’t looked inside or seen Tesla signage, but this couldn’t be anything else, right? 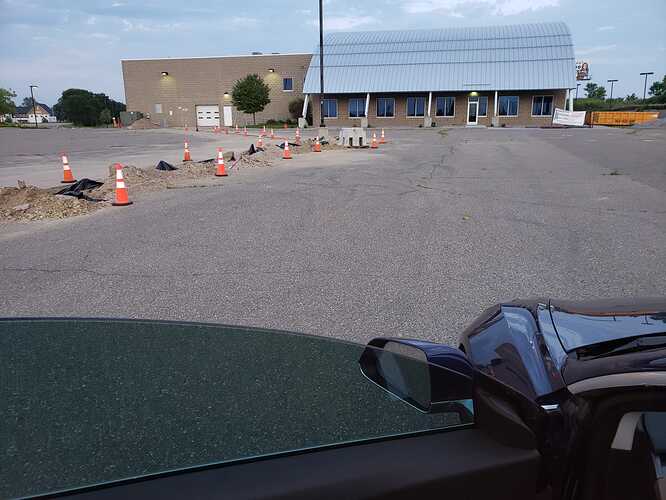 Some months ago after test driving a Model Y, I got a wink-wink-nod-nod at the service center in Maplewood when I asked if they are building a service center in Rogers. They didn’t hint at all where it would be, but I knew it had to be the old Hummer dealership which in recent years had been a seasonal Halloween shop.

The property used to be (perhaps still is?) owned by Wally McCarthy and his family. https://www.bizjournals.com/twincities/stories/2005/08/22/story5.html
It closed within a few years of opening as Hummers didn’t work out for Wally. Perhaps ironically, he started his dealership career in like the 1950’s selling Edsels, then ended it selling Hummers fifty years later.

Welcome, and good find! Thanks for posting. So, it’s 100% clear that there will be 2 supercharger stalls as those precast concrete items are the bases for the supercharger posts. How many beyond that can’t be told by just this picture. Keep an eye on the location if you can, hopefully more hardware will show up and we’ll be able to tell whether this site is just going to be used for the service/sales facility or if it will also be a public supercharger.

Thank you! There are only two bases visible, but I think those are the first of more to come. Construction started pretty recently it seems. And you can see how many conduits have been run already and the length of the excavation. It looked to me like there were 6-8 conduits sticking up under those plastic-covered spots along the trench. I’m curious what the wider section they’ve cut into the asphalt is for. I would say one of the pre-fab four stall supercharger slabs, but they’re already putting in the conduit and those cement bases. 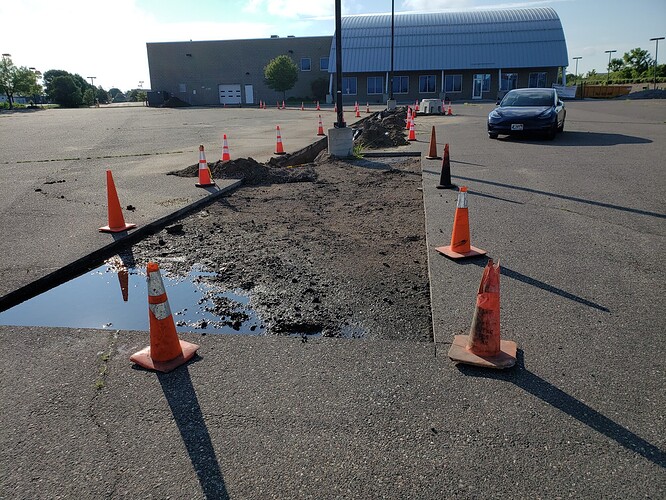 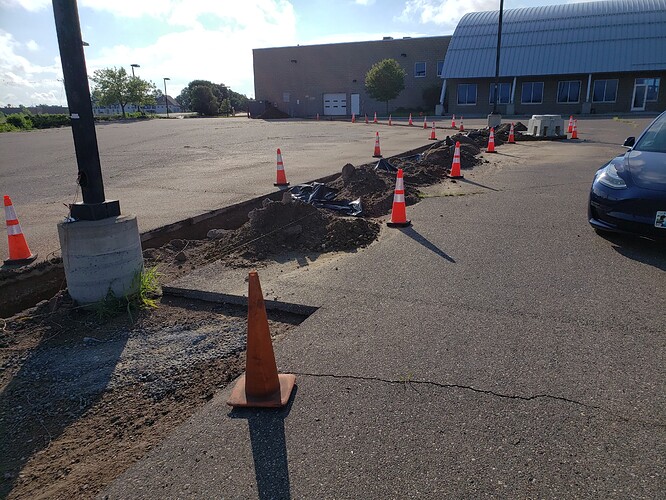 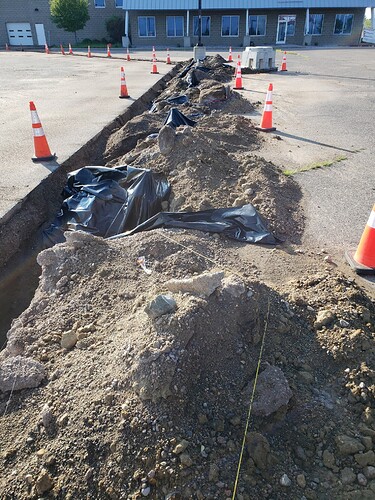 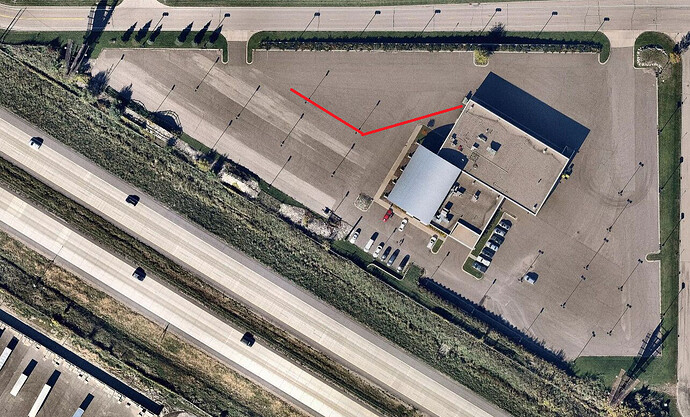 So far I can’t find a permit specific to superchargers. But this at least confirms the service center with documentation, beyond the hearsay and visual clues I’ve provided. It’s interesting the commercial building permit refers to “Tesla Service Plus”. I’ve not heard that one before, but maybe it’s not a new naming convention? (Edit: Apparently Service Plus means it’s sales and service)

I’m digging through all the documents. This is another clue. The signage may suggest it’s not a public supercharger, but we’ll have to see.

I just noticed that the PS2 page about signage says quantity 16. Sixteen signs? The graphic suggests two-sided signs mounted with silicon adhesive. There is parking on both sides where the stalls will be. Sixteen superchargers?! 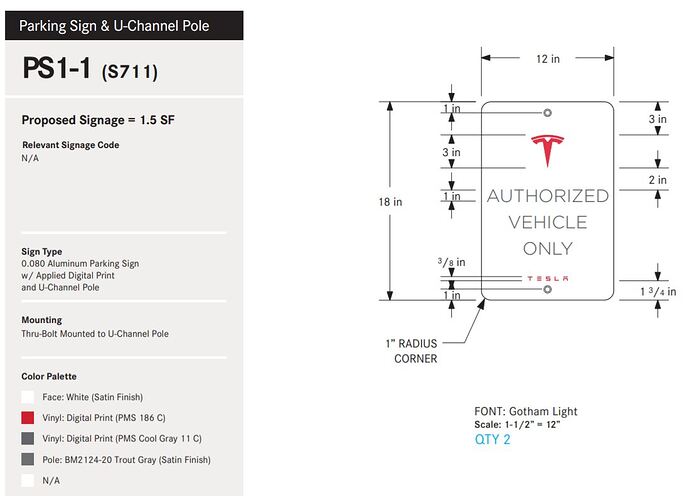 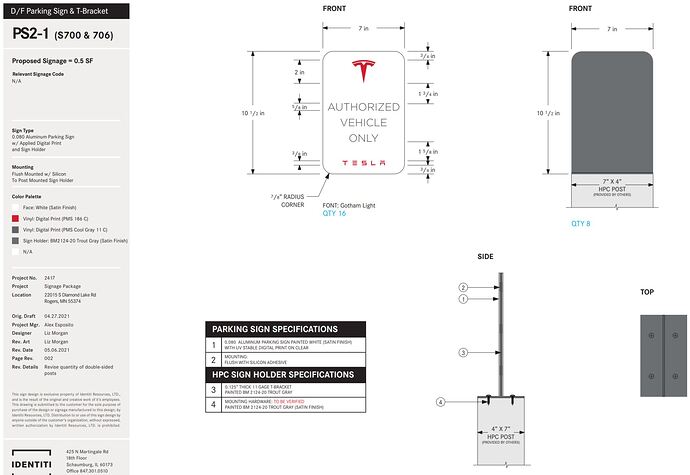 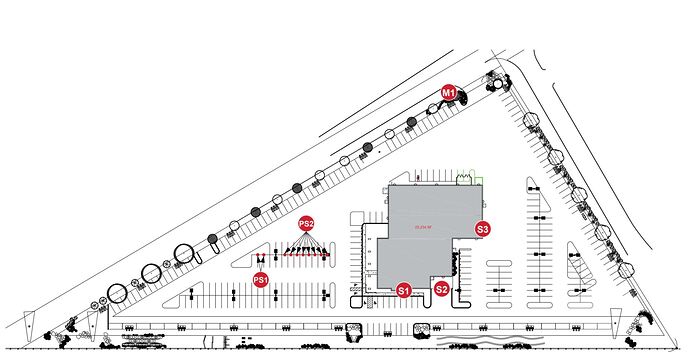 At service/sales centers Tesla sometimes installs a couple supercharger stalls alongside a bunch of L2 stations. Lately, these have all been reserved for use by the service center, not by the public. The pictures you’ve uploaded are great, but don’t yet have the detail needed to distinguish between whether all the spots there will be for superchargers or if most of them will be L2 stations.

There’s also the possibility that since these signs say “Authorized vehicle only” and not “Tesla charging only” they could be unrelated to charging - perhaps something as simple as staff parking or inventory vehicle parking (as opposed to customer parking)?

We can at least say some level of charging is going there, considering the conduit that’s been run to the transformer by the building, and the minimum two supercharger cement bases. I’m hopeful they put in more than two, but it’s true this may not be for the public and may not be in the in-car nav. Still, it’s useful for customers in a roundabout way for new buyers picking cars up or current owners getting service. You get your car with a more charged up battery.

Considering there are eight signs on one side and two signs on the other, I’m holding out hope for at least eight supercharger stalls, even if they aren’t for normal public use. That would be so cool to see at a service center.

EDIT: It could easily just be 8-16 destination chargers with only two superchargers. That would fit the signage, too. I probably needed to curb my enthusiasm when I saw the trench. Now with the signage, it’s seeming more and more likely it will only be two supercharger stalls for business use. But that’s still exciting to me on a nerdy level.

Charging setup is complete and apparently online. Of course it looks like for official use only, not general public access. Still pretty cool! 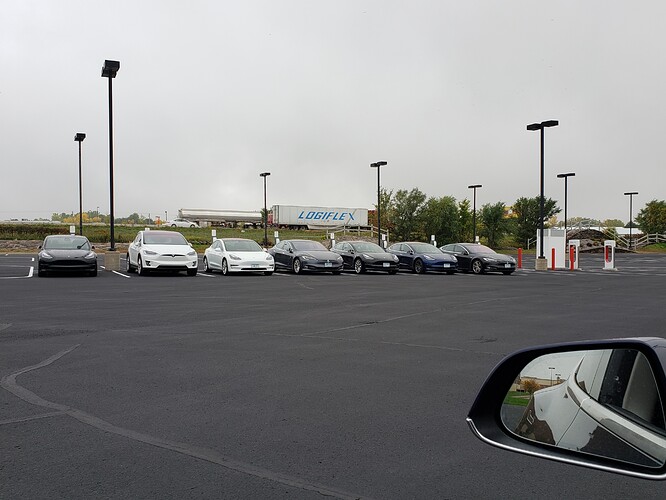 It’s not quite open yet, but seems close. They say authorized vehicles only. I wasn’t bold enough to try to plug into a supercharger, lol. 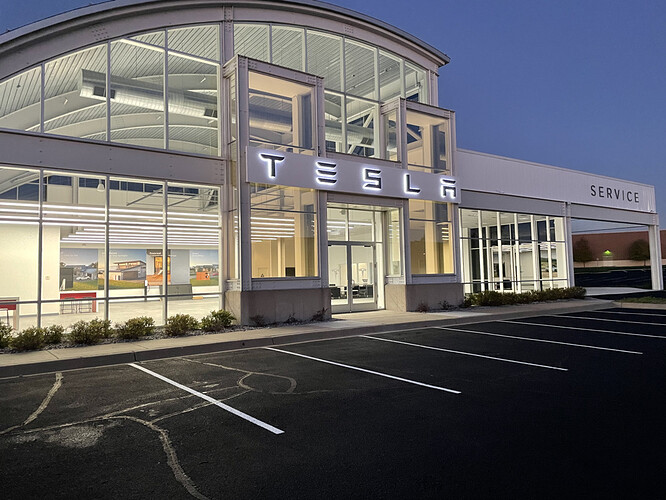 I got an email that the Service Center is open!

I stopped here today. This two stall supercharger isn’t on the on screen navigation so my car didn’t preheat the battery and it was cold, around 20F. I plugged in and only got 55KW at 30%, but it was free. The destination chargers are so authorized cars only, but no such sign for the superchargers.

Can we please update this location to not reflect these as public chargers? This is a service center with two super chargers for service use. ABRP is routing people to this location and frustrating owners and the SC.

I’ve marked this one as permanently closed.